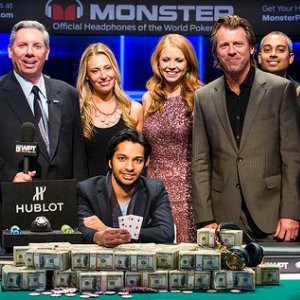 The 2015 Spring Championship of Online Poker (SCOOP) is underway and, already, Mohsin chicagocards1Charania (pictured), who is playing under the user name sms9231, has made waves, taking down Event #4’s high-stakes version for $198,000. The $1,050 No Limit Hold’em Turbois one of just four Turbos on the schedule and was the first SCOOP event to finish.

There were 1,100 players, which meant that the tournament’s guarantee of a half-million dollars was more than doubled. By the time registration actually closed, there were 801 players remaining and by the time the final tabled rolled around, Charania had built better than a 2:1 lead in chips over the next closest person.

A deal was briefly discussed three-handed, but nothing came to fruition. Charania took down the first four pots after that and then busted Benny toweliestarSpindler in third place with A-2 against J-10. Three hands later, the tournament was all over after Ryan urbanlights Yu moved all-in with ducks and lost a race against A-8.

His biggest claims to fame in the poker world are taking down the World Poker Tour’s Five Diamond World Poker Classic last December for $1.1 million and scoring a win in the European Poker Tour’s Grand Final in 2012 for $1.7 million.

According to the Hendon Mob, Charania owns $4.5 million in career live poker winnings, good for 145th on the all-time money list and #2 for his home state of Illinois.

Here’s how the SCOOP final table shook out: