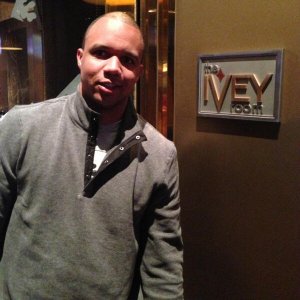 The exclusive London casino Crockfordshas responded to Phil Ivey‘s (pictured) lawsuit with its own account of how the man regarded as the best poker player in the world won over £7 million playing Punto Banco over the course of two nights in August 2012.

InterPokerhas been securely dealing cards since 2002. The recently re-launched site offers a wide array of promotionslike $10 cash free for new players as well as a 25K race for SnG players. WSOP qualifiers are also running now. Check out the new and improved InterPoker.

According to an October report by the U.K.’s Daily Mail, Ivey ran £1 million up to over £2 million the first night he played at a high-stakes Punto Banco table. Starting with £50,000 bets and eventually moving up to £150,000 bets with the casino’s permission, Ivey started the night staring at a deficit of £500,000, but was able to make that up and then some before he went to bed.

The following night, he made another £5 million and then decided to cash out. Told that the bank transfer would be delayed until Tuesday, August 28 because of a bank holiday, Ivey left the casino looking forward to seeing his winnings when the banks re-opened. Unbeknownst to him, Crockfords began an investigation into possible cheating and never paid him his winnings.

Last week, Ivey revealed that he was suing Crockfords, saying, “I was given a receipt for my winnings, but Crockfords has withheld payment. I have no alternative but to take legal action.” 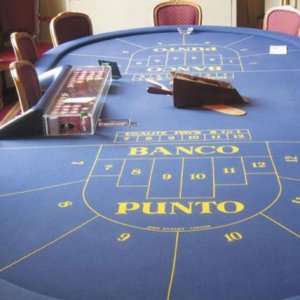 This weekend, Crockfords struck back, detailing how it believes Ivey did so well at a game entirely based on luck. In another report by the Daily Mail, Crockfords points to a defect in the cards used that night as the reason why Ivey was able to win, win, and win some more. The card backs were emblazoned with a diamond pattern that is normally symmetrical. The cards in the game that night, though, were allegedly mis-cut at the factory, producing an asymmetrical pattern, one where the diamonds on one edge were sliced in half.

Crockfords alleges that Ivey and his female companion were aware of this flaw and used it to their advantage. In Punto Banco, a variation of Baccarat, two cards are dealt to both the Banker and the Player. The values of the cards are added (2-9 are face value, while 10-K are zero) and the sums, with the tens digit truncated (thus, 17 becomes 7), are then compared and the hand closest to nine wins. If the gambler bet on the winning hand – either the Banker or the Player – he gets paid.

Because of the rules, 8 and 9 are valuable cards. According to Crockfords, whenever an 8 or 9 (and possibly a 6 or 7) was revealed, Ivey’s friend was able to convince the dealer to rotate the card 180 degrees before putting it back in the shoe, claiming that Ivey was the superstitious sort. Not thinking this would have any effect on the game, the dealer complied. Crockfords alleges that because of the asymmetrical card backs, the cards that were turned were easily identifiable. Ivey and his friend supposedly used that information to their advantage during later deals.

The two were also allegedly able to get the casino to “hold the shoe,” or retain the same decks of cards for when they returned the second day. Normally, the casino would destroy the cards at the end of the night. Thus, when Ivey sat down for his second session, the rotated cards were still there and he could bet accordingly. Here’s a graphic of the alleged rouse that appeared in the Daily Mail: 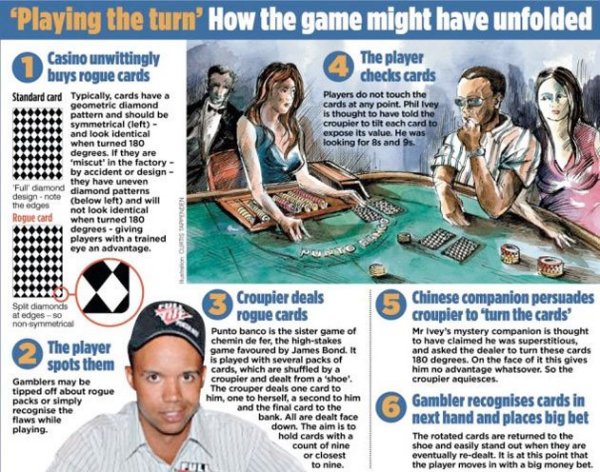 According to the Daily Mail’s October report, when Crockfords’ parent company, Genting, sent its own investigator to check things out after the incident last year, no wrongdoing was found. The investigator interviewed the staff on-hand that night, looked at the cards, and viewed the security tapes and found nothing amiss. The only warning flag that was raised surrounded Ivey’s female companion, who had had her membership to another casino suspended.

It remains to be seen which side is telling the truth, but regardless of the outcome, we are excited to see how this soap opera plays out. You can discuss the news in this PocketFives thread.