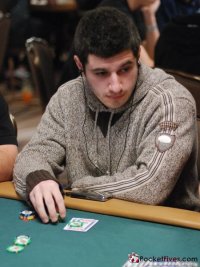 What could have possibly provoked poker pro Phil OMGClayAiken Galfond (pictured) to comment that it was “the craziest hand I’ve ever seen“? After all, Galfond has been around the game for quite some time and, according to the Hendon Mob, first lodged a live tournament cash in 2006. But, on Sunday in the $1 million Big One for One Dropat the 2012 World Series of Poker (WSOP), the word “craziest” took on a whole new meaning.

We’ve seen stories of players folding pocket queens and pocket kings pre-flop and making tough laydowns of straights and flushes. However, have you ever seen someone fold quads? And when we say, “fold quads,” we mean fold face up? That’s exactly what happened on Sunday in the One Drop event.

HogWild Poker, a free, U.S.-friendly online poker site, makes PocketFives’ WSOP coverage possible. The site is staking 10 players with $500 buy-ins to live events at casino tournaments of their choice every month. On top of that, each month, HogWild is throwing in a $2,000 staking package to a WSOP Circuit Main Event. Sign up for HogWild Poker for free today by clicking here. U.S. players are welcome. 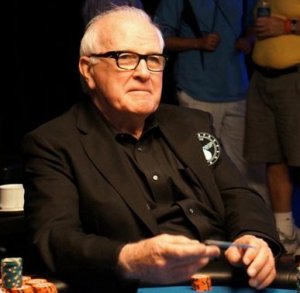 According to coverage on WSOP.com, on a board of Js-8c-7s-8s-Ks, Mikhail Smirnov, a businessman and part-time poker player from Moscow, pushed out a bet of 700,000. Then, Winmark Corporation CEO John Morgan (pictured), in a battle of the businessmen, pushed all-in for 3.4 million. Now, here’s where the story gets interesting.

We feel like most players would have called immediately, but not Smirnov, who tanked for several minutes. He had pocket eights for quads and could only lose to 10s-9s for a straight flush. But, Smirnov somehow let go of his hand, and when we say, “let go,” we mean fold face up for the entire table to see.

WSOP.com asked Smirnov for his logic on the rather unconventional move: “It’s impossible for [Morgan]to have a full house of kings, impossible [for him to have] a full house of jacks because he did not re-raise from the button [pre-flop]. He would have re-raised with jacks and kings [pre-flop]. If he has a full house of sevens, then he’d just call [the river bet]. A bluff is impossible because he likes to play in the tournament and he is not a professional. I think I have no chance to win, plus he was so excited on the turn [when he made what could be a straight flush].”

There you have it. Quad eights into the muck. Poof.

On PocketFives, a thread popped up in the Live Poker forumabout the hand. PocketFives Mod dgilliswrote that he couldn’t believe the fold: “He folded quads = scared money. [Morgan] could have showed me one of the two spades and I would still have tripped over myself to call.”

A player who lives in Morgan’s home state of Minnesota, fasteddee74, believed he had the goods: “I know the Minnesota pokercommunity is going to corner him at the card room when he comes back home… I am 99% sure he did have it. I have played with Morgan at our local rooms a few times in tournaments and I just do not see him making this play on a bluff. Go John Morgan!” 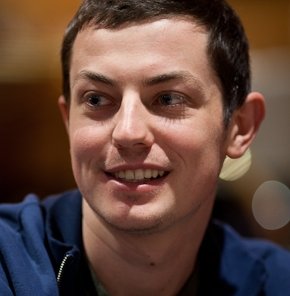 Galfond, who was at the table when the hand happened, called it “the craziest hand I’ve ever seen” on Twitter. On Monday, the man who once owned a condo with a slide in it doubled up after making a set of eights against Tom Dwan (pictured) and Guy LalibertÃ©. Galfond had the best of it all along against A-K and pocket sevens on a board of J-6-2-10-8 and moved to 1.4 million in chips. However, he busted from the tournament around 1:00pm PT on Monday.

Also on Monday, a double elimination saw the end of Daniel Negreanu and Dwan in the One Drop. Negreanu Tweeted about the hand: “Thought I might finally get lucky, Ah-T vs 9-9 and A-A, flop 9-7-4hh, turn 8h. Needed a 6, J, or a heart. River 9. Good news, there is a $1500 NLH ugh.” Dwan held aces in the hand and, like Negreanu, lost to quads. Interestingly, Smirnov was the bearer of quads once again, although he didn’t fold them this time.

Also busting on Monday was Vivek PsyduckRajkumar, whose A-K of diamonds could not win a coin flip against the pocket queens of Frederic Banjout. The board fell jack-high and Banjout’s ladies were enough to scoop the pot.

At the time of writing, Brian tsarrastRast held a commanding lead in the One Drop with a stack of 10.7 million, 2.3 million more than Phil Hellmuth‘s second place tally of 8.4 million. Hellmuth earned his seat into the $1 million buy-in tournament through an MGM qualifier on Saturday and was rumored to have 30% of himself.

The One Drop will play down to a final table on Monday before ESPN2 picks up the tournament on a 15-minute delay on Tuesday starting at 1:00pm PT. Four hours later, the action will switch over to ESPN and continue until a winner is crowned. The record-setting $18 million top prize is the richest in the history of sports sans boxing.

What do you think? Did Morgan pull off one of the biggest bluffs in WSOP history? Post a comment here and let us know.