After months of build up and hype, the Global Poker League finally got cards in the air this week with three days of action and it was two players, Randy Lew of the Hong Kong Stars and Davidi Kitai of the Paris Aviators, who stole the show.

Kitai gets the honor of going down in history books as the first winner of a GPL tournament. Kitai came out on top of a Six Max match that included Daniel Cates, Dzmitry Urbanovich and Igor Kurganov. Lew, one of the wildcard picks for the Stars, left his heads-up match with Sergey Lebedev of the Moscow Wolverines with a perfect record – the only player to do so in Week 1.

The schedule has teams playing Six Max matches, one player from each squad, on Tuesdays and Heads Up matches on Wednesday and Thursday. Teams play against their own conference until the Summer Series when inter-conference play is introduced for the first time.

The Paris Aviators had the best opening day in the Eurasian Conference. David Kitai won the first Six Max match and finished third in the second to earn 10 points for the Aviators. The Hong Kong Stars picked up the win in the second match-up thanks to Raiden Kan.

The most talked about hand from Week 1 was a hero fold by the Belgian that seemed to dominate post-match conversation. With a 5-1 chip lead over Kurganov, Kitai checked his option with

after Kurganov limped his button with

. Kitai then checked the

flop to Kurganov who bet 1,600. Kitai check-raised to 4,444 only to have Kurganov reply with a re-raise to 7,288. Kitai folded, leaving announcers Griffin Benger and Sam Grafton in shock.

The other end of the spectrum was the Berlin Bears. Daniel Cates managed to post sixth place finishes in both matches, leaving the Bears without any points after Day 1. Cates admitted on Twtter later to being distracted while playing his GPL match.

misread my hand in gpl, thought i had A9s somehow (j8s hand)… I was playing cash on side. Pretty tilting even though it’s not for money…


In Americas Conference play, Jason Wheeler, of the New York Rounders, also had a win and third place finish to give his team 10 points. The Las Vegas Moneymakers also had a strong showing thanks to Anthony Zinno finishing runner-up in both matches. And Anthony Gregg repeated Cates’ performance, posting identical sixth place finishes for the San Francisco Rush in both matches.

With the Six Max matches out of the way, the schedule turned to Heads Up matches in the Eurasian Conference. The Hong Kong Stars vaulted themselves into first place in their division thanks to Randy Lew’s 3-0 sweep of Sergey Lebedev of the Moscow Wolverines. Lew was the only player over the course of two days of heads-up matches to win all three.

Grospellier earned six points by beating Cates 2-1 in their match while Justin Bonomo did the same for the London Royals beating Timothy Adams of the Rome Emperors 2-1.

The third day was all about the Americas Conference. Possibly the most highly anticipated match saw the L.A. Sunset’s Olivier Busquet, considered by some to be the best heads-up sit & go player in the world, going up against Darren Elias of the Sao Paulo Metropolitans. Busquet earned six points for the Sunset, beating Elias 2-1.

Zinno and Cates were the only two players to play every match for their team in Week 1.

Sure, Lew went 3-0 in his match against Lebedev and deserves some consideration, but Kitai gets the Week 1 honors. The Belgian pro earned 10 points for his team with a win and a third place finish in the Six Max matches and gave those who tuned in on Twitch something to talk about with his amazing fold against Kurganov. 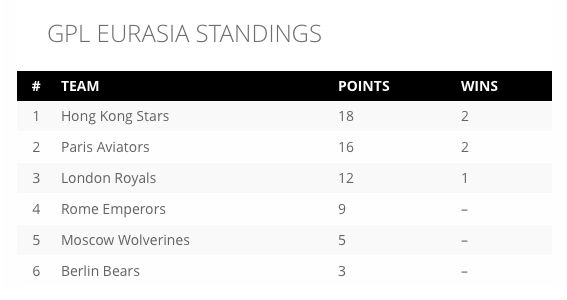 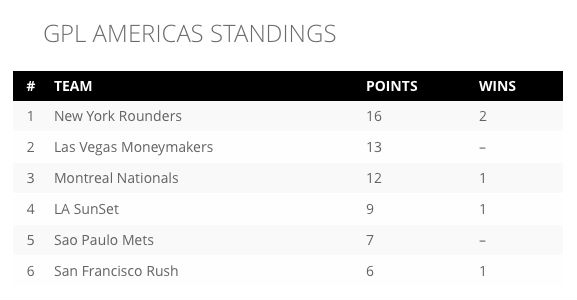 All matches are streamed live on Twitch.tv/GPL.