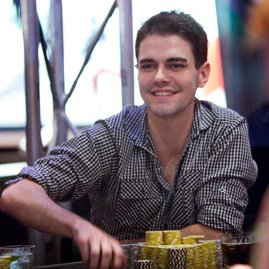 “So much for the game being unbeatable and new Europeans taking over the game. Good to see regs from 10+ years ago still on top of the game, as James Andy McLEOD Obst (pictured) shipped the PLO SCOOP High the other day. First ballot shoe-in for the Online Poker Hall of Fame.”

Those were the words of longtime PocketFiver AJyowlerabout the results of a $1,050 Pot Limit Omaha Six-Max Rebuy SCOOP event on PokerStarsthis week. Obst defeated 2009 WSOP Main Event Champion Joe jcada99 Cada, so he certainly had his hands full, and earned $166,000.

There were 286 entries and Obst steamrolled the final table. He entered with a slight edge in chips and busted Artem “roi kin23” Litvinov in sixth place. Then, within an hour, he had built better than a 3:1 chip lead on the next closest person. Obst sent John “dagunman” O’Shea home in fourth place and then relegated UK’s flong78to the rails in third to set up heads-up play against Cada.

The former Main Event winner was down a daunting 15:1 in chips to start heads-up play, which lasted all of four hands. Here’s how the final table shook out:

This was Obst’s third SCOOP title. He has also won WCOOP and TCOOP events.

2015 has, so far, been the year of old school winners, as Obst, Calvin cal42688Anderson, Christopher kid_brammBrammer, and Jason treysfull21 Mercier have all won SCOOP titles.