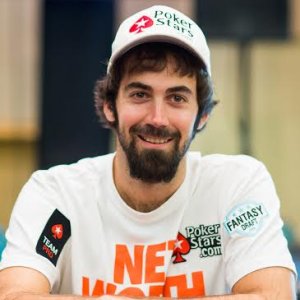 The start of the annual PokerStars Spring Championship of Online Pokerhas been mighty kind to PocketFiver Jason treysfull21 Mercier (pictured). He managed to score two SCOOP wins in the first eight events.

His first title came in Event #5, a $2,100 Fixed Limit Badugi tournament. There were only 56 players, but the prize pool still swelled to $112,000 and the top seven left with cash. Mercier was fourth in chips entering the eight-handed final table, but built a 2:1 lead by the time heads-up play against Adam AdamyidOwen began.

One night later, Mercier was back at it, winning a $2,100 No Limit Five Card Draw tournament. There were 43 entrants in that one and Mercier beat out Russia’s berserk64 heads-up for $34,000. The final table also featured the likes of Mike SirWattsWatson and Vladimir GVOZDIKA55 Schemelev.

Mercier told PocketFives on Wednesday, “I feel good about it. I am happy to have a chance at winning the SCOOP Player of the Year title. I have never played a full SCOOP or WCOOP schedule and this time I actually am, so I’m hoping I can win it.”

Mercier has $1.6 million in tracked online tournament winnings, including WCOOP wins in 2010 and 2012 for almost three-quarters of a million dollars combined. He has seven SCOOP, WCOOP, and FTOPS titles under his belt.

In the live arena, Mercier has $13.8 million in winnings, according to the Hendon Mob, and is #12 on poker’s all-time money list. He hit it big back in 2008, introducing himself to the mainstream poker world with a win in the EPT San Remo Main Event for $1.3 million.

His largest live cash was worth $1.6 million and came last year in a Super High Roller Event in Las Vegas. He was the EPT Champion of Champions in 2011.

Congrats to Jason Mercier on his SCOOP run!