It’s been 806 days since the last hand of the World Series of Poker was dealt. And for those who love the WSOP, it’s been an excruciating long 806 days. That’s a lot of waiting.

I am one of those people and, like many out there, I simply couldn’t wait.

But finally, we’re back!

Truth be told, writing in first-person singular isn’t really my style, it makes me uncomfortable. But if I’m to do my job on this one, it’s what has to be done. So, forgive my tangents and poorly thought out poker strategy, I’m here to bring you into the very First* Table of the 2021 WSOP.

I’ve had this idea for some time. You see, typically, in years past, on the opening day of the WSOP, there’d be nine or so over-eager players looking for action right off the bat. Then a single-table satellite would spring into action. It’s the first official table of the series. This year, I’d be one of those beavers – first in line, vaxxed and masked, ready to play for a lamer. No matter the buy-in, I was all-in.

“Just don’t be the first person out,” Josh Arieh said to me. “Then you’d have to stand by and take notes on your little pad.”

No little pad for me. I’m going to be freerolling The Reunion by 9:30 am.

But getting into the “First Table” was going to take some doing. I arrived in Las Vegas the day before, to settle in and get the lay of the land. The prep looked good, the WSOP looked ready. And, after a day of writing, watching the SHRB, and grabbing a very unhealthy bite to eat at the All American Grill, I retired to the room with the intent of getting up early and being ready to roll.

CUT TO: 8 AM PACIFIC, OUTSIDE THE FRONT DOORS OF THE PAVILION.

I’m here…far too early. Currently uncredentialed and getting eyeballed by security as to why I keep popping my head in.

What can I say, my mother raised a worrier and I wanted to be certain. I hover around, snap a photo or two and wait. And wait some more. It’s really early.

One man shows up asking about a 9 am mega satellite, another wants to know where to buy in for the Employee Event. As 9 am approached, there was a small, unassuming group of people looking to get things started. This is great, some of these players will obviously want to be a part of the very First Table of 2021. My future opponents perhaps?

Like a small herd of slow-moving sheep, this group broke through the now non-existent security detail and spread out looking for whatever it was that motivated them. For me, I looked for the single table satellite section, which, it should be noted, has moved from what I would call the front of the Pavilion, to the center by the middle cage.

A brief but important aside: at the same time, a scheduled 9 am $180 mutli-table satellite was brewing. Most hadn’t been able to buy tickets yet, and the dealers weren’t in position. All of this bode very well for me, possibly, getting dealt the very first hand of the autumn.

I hop in line and very quickly it’s 10 people deep. It’s moving slowly because there’s vaccination verification going on, people without ID, and…what’s this – the system doesn’t have single table satellites available yet. You can’t sign up. And no one really seems to know why. Then, unprompted, the guy ahead of me starts in on a bad beat story…from 2005. This is bad and getting worse. What?? You had aces!? The guy hit a straight?! Say it isn’t so.

I was polite but it’s common knowledge – no one wants to hear a bad beat story.

The WSOP is having some first-day, early morning hiccups and it’s completely understandable. It’s been roughly 26 months since the last series and everyone from the cashiers to the floor to the dealers are looking to shake off the rust and get to the grind. However, right now all of them are in fine form and it’s the computer system that isn’t cooperating. Time to take a seat.

It’s 10 am now, and the $180 satellite has cards in the air. They won, they’re first. I’m sitting alone at a table trying to decide if I should just scrap this idea. My friend and former colleague Donnie Peters stopped by, we talk about Addamo’s run in the Super High Roller Bowl. Then Kevin Mathers (aka Kevmath) takes a seat, it’s early but it’s clear he’s already had a day. Arieh swings by: is this thing going to happen? “I don’t know,” I tell him, but if it does, his prior advice is duly noted.

By this time there are three of us who seem committed to getting this single table off the ground. A nice guy with an interesting decision to go with the under-the-chin face shield (hadn’t seen that yet), his friend who got in early to register for the Millionaire Maker and randomly bumped into him and decided to take a seat, and me, your intrepid reporter, still wondering what I’m doing here 2.5 hours after making my way down from the room. 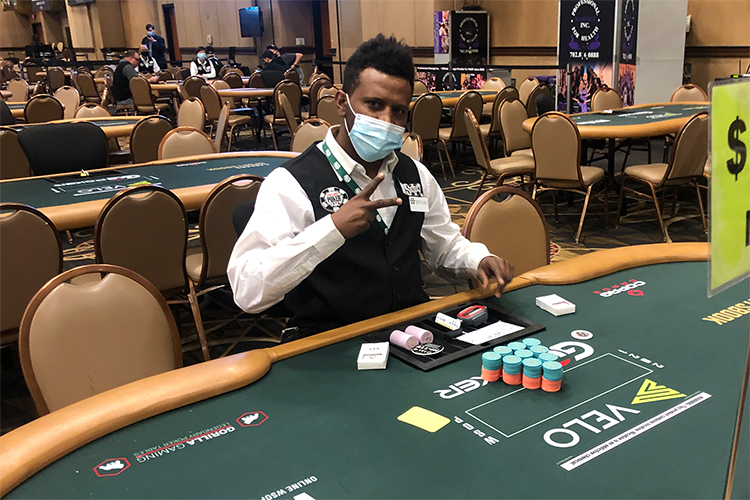 Then, some random grabs a seat and flings his receipt at Benyam, the dealer. He announced the system was up and it’s time to go get those seats. So, I hop back in line, again 10-15 people deep with people registering for all sorts of events now. The mood in line lightens up a little, people are slowly moving up and that’s when I decided I’m committed. I can’t let you, the reader, down.

Finally, it’s my turn and I hand Susan my Total Rewards card, state-issued ID, and buck-twenty-five.

And the system goes down. Again.

Only this time, I’m not going to pull the rookie maneuver of taking a seat. Susan and I are going to get to know one another as I keep my spot at the cage. (Susan, by the way – an absolute delight).

It’s 10:45 am, we continue to wait. Mike, the guy who was behind me in line and was also buying a seat, was at another window, looks at me and says something to the effect of “This is taking forever,” to which I replied, “Yea, a long way to go to bust on the first hand.”

By 11:00 am the $180 satellite is on another break and Jack Effel was on the mic welcoming everyone – in an actual bracelet event – to the World Series of Poker. After a short, warm welcome, he said the words everyone waited all those days to hear: “Shuffle Up and Deal!”

At 11:19, a minor miracle took place – a receipt with my name on it printed out and I was officially in the First* Table of the 2021 World Series of Poker.

I made my way to the table and grabbed a seat card, seat number 6. “Lucky number 6,” I said. 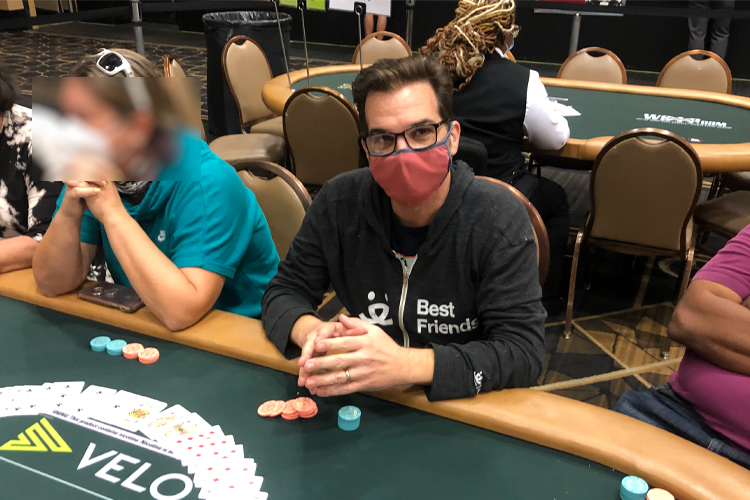 As I sat down, Seat 2 and Seat 4 were talking about how Bezos isn’t the richest person in the world – the richest person in the world is “off the grid” but we’ll never know who. I struck up a conversation with Will from Arizona in Seat 9. He came to town with a friend who is playing in the Casino Employees Event and said how nice it was to be back and to also have an actual lighthearted conversation. We discussed how poker is on an uptick with many live players taking last year off.

“I usually come to the Series, go broke, and have to go home and rebuild,” he said. “I didn’t do that last year.”

Mike from the line pulled Seat 3 and eventually nine of the 10 seats were ready to go. That’s when Maurice Hawkins walked up into the tables and said “I’ll get my feet wet, let’s go.”

He began to sit down and I start thinking about how besting Hawk heads-up for the lamer would make for a nice end to this story. Hawkins, the 14-time World Series of Poker Circuit ring winner (most all-time) was ready for action. However, the action wasn’t ready for him. Hawkins just saw the table and was looking to fly – he never hopped in line and bought a ticket and wasn’t about to for a $125 table. 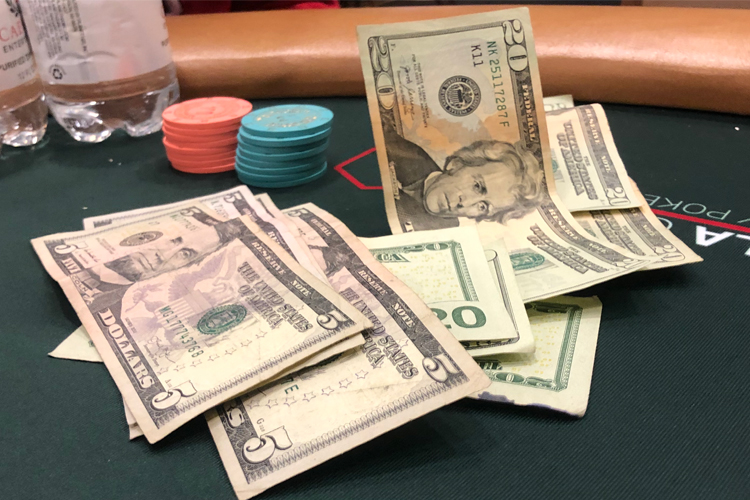 Will in Seat 9 suggests a $20 last longer and nearly everyone pitches in. For the uninitiated, often at these single-table satellites, someone will offer a side bet of a last longer and the last person or players collect that amount on top of the lamers. This crew had a tidy $180 as a little extra side action with only one player opting out. When the final player of the First* Table of 2021 took their seat, it was 11:47 am. I’d been waiting 806 days 3 hours and 47 minutes for this moment.

Benyam shuffled and the table which was once “the chattiest table” Seat 5 had ever been a part of…went silent.

. Our hero raises to 400. Seat 7 wants more – he moves all-in for 1K. Both blinds fold. Seat 2 commits his stack and I simply stick it in. Again, first hand.

Seat 2 proudly turns up with the

. My pocket kings are on their back.

Benyam rips off the flop. The

is in the window. The

is the door. But there it is, the

hits the turn. It’s looking grim. And when the 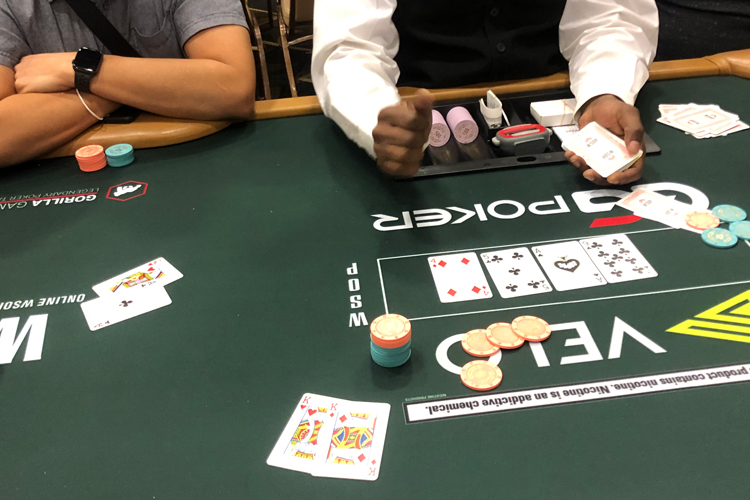 Fortunately for me, I left my “little pad” elsewhere. I grabbed my backpack and wished everyone luck and future good games. You see, I like to be polite, and even though I know that no one wants to hear a bad beat story – that just happens to be the true story of the First* Table of 2021.

But at least we’re back.